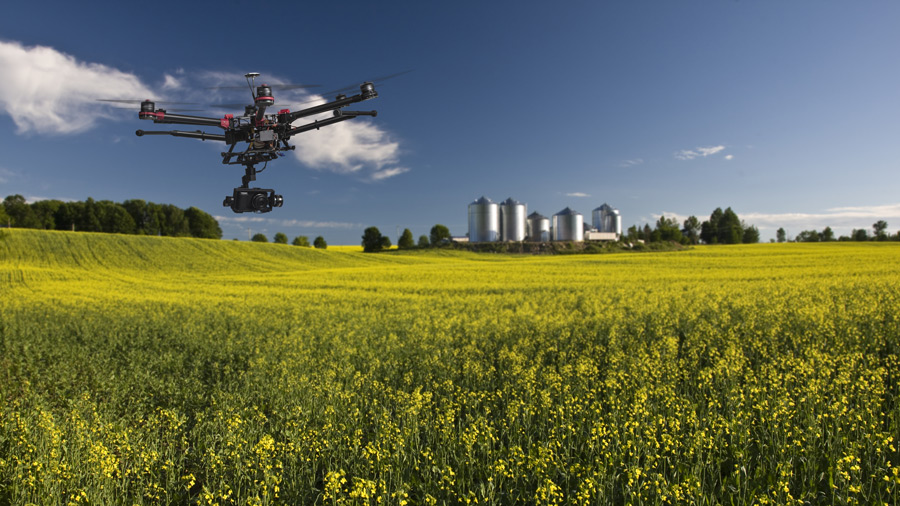 The use of drones may revolutionize agriculture

The use of drones (UAVs) in agriculture is a growing common practice, and it’s good results in terms of efficiency are confirmed both by farmers and researchers. “The agriculture of drones is budding”.

However, there are other striking uses because international corporations are betting or because their applications appear to have a ‘more direct’ application in today’s world necessities… like when Amazon revealed its program for sending packets across by using these devices or the UK police department planned to use them as a surveillance system. However, the benefits of its application in the agricultural sector could be enormous, and that the use and improvement of this technology has an assured future. More even it has a present, because in some countries drones are being operating in agriculture fields long time ago…

The drones support for maximizing yields its already recognized, since unlike the farmer, who must move over the field for searching crop deficiencies that may exist in culture, the drone, just flying over the field is able to gather huge information on crops status; and more accurately, thanks to the ‘hot air’ and multispectral photographs, plus time-lapse cameras to monitor fruit and it’s phenology or for determining chemical parameters with its spectral detectors.

With the advent of technologies such as satellites to the world in the 70s, there was a revolution on how to take pictures over territories. The gathered data, once processed and brought to digital maps permitted to obtain information like vegetation indexes, allowing an easy method to see and analyze crops and culture problems. This type of remote sensors is used by many countries to measure the agriculture productivity, drought susceptibility, the land characterization or the biomass available.

Currently, other remote sensors used in agricultural practices are drones (UAVs), which capture very high resolution images and provide real-time and accurately information from crop fields. These data is necessary for today’s farmer’s management, to learn about evolution, increase or decrease of plant pests, weeds, diseases, irrigation, nutrition and vigor related to crops. Early identification of these conditions allows to take critical management decisions quickly and proactively in order to prevent crops losses and or damages.

All the problems firstly explained said the agronomist and Director of the National Program for Precision Farming of INIA, Stanley Best, can effectively addressed in the exact areas where required at lower cost. “When I move into the culture and see that I have dried plants, it is a symptom of lack of irrigation, but can be detected much earlier through the multispectral photography, as well as nutrition and other problems. That allows us to respond before the issue forward and becomes uncontrollable, and in areas that really need it, which also means that we do remediation at lower cost and with fewer agricultural inputs, which implies a more sustainable agriculture” he said.

According to Best, “the producer need to have accurate information to take action, and today, technology allows us to tell the producers what to do in a more efficiently way “.

Best also explains the importance of understanding the potential of these new technologies as they have useful results in varied agronomic practices, “we keep improving the efficiency of the field at different stages of management, such as fertilizer and pesticide application, including , harvesting, for example, being able to decide where to harvest manually, or where mechanized”.

The application possibilities seems to be endless, and that’s why in IDEAGRO we are widely interested in knowing its uses, capabilities and evolution, because we think will be key in agriculture not to late…

In addition to the US, the drones are already used among others in countries like Japan, Spain and Brazil. For example, according to recent studies by the International Association for Unmanned System Devices, “the economic impact of drones’ application in US agriculture by 2015 would be of about 2.000 million, creating 20,000 jobs”.

How drones ‘work’? What else can bring?

A single drone can accurately monitor hundreds of hectares in order to gather information on hydration, temperature or the crops growth rate. One of the most important functions attributed to these devices is premature location of diseases and pests. This way farmers will be able to avoid the complete loss of crops caused every year by these problems.

All this information provides significant cost savings for farmers. Prevent pests also reduces the amount of chemicals used in crops. Not only the crops are grown more naturally but also are not necessary to buy so many herbicides and pesticides as before and when necessary, drones could be used to spread fertilizers much more efficiently and accurately.

The drones could also help controlling how the irrigation works and also serve as makeshift scarecrow, to keep the birds away from crops when almost ready to be harvested. They can even send video and pictures in real time to the farmer smartphone so can know how the crop is at every time from elsewhere. Such operations have already been implemented, and nowadays one of the most advanced countries is Japan.

In the Land of the Rising, a drone model, the Yamaha RMAX has been working in the fields from two decades ago, dealing with pesticides and fertilizers spread over the culture. Its history is ancient. In 1983, the Ministry of Agriculture of Japan was concerned about the aging of the rural population. To alleviate this problem was proposed to modernize the country as a way to attract young people and increase productivity.

Yamaha was charged to develop an aerial unmanned vehicle to help in farm work, and in the 90s the first units were introduced… By now 40% of Japanese rice cultures have a drone. The technology has been exported to South Korea and most recently to Australia, a land where large plantations abound. The Japanese company Yamaha hopes to enter the US market drones in 2015, orienting its product to crops such as maize, grapes, pistachios or almonds, apart from rice.

What are the latest developments in drones use?

Universities have also noticed the potential of these devices and are conducting research in to the practical usage of these devices. The University of California is testing the ability of small unmanned helicopters capable of treating vineyards located over inaccessible terrains, and at the University of Kansas they are creating maps detailing the nitrogen deficiencies in the soil to help farmers to apply fertilizers where needed.

In the academic circles is belief that “drones can revolutionize agriculture, reducing pesticides needs and increasing crops production.”

Universities and companies worldwide have their eyes on September 2015, date on which it is expected that the Federal Aviation Administration established to regulate the use of these devices. A hearty economic market that according to AUVSI, “could generate huge profits in the US economy.”
For now, and despite its potential benefits, the FAA has decided not to take the step of authorizing the drones for commercial use, mainly because it fears that, while flying below 400 feet -122 meters- could interfere with national airspace and cause complications. Many States are trying to pass laws to achieve a moratorium limiting the use of drones beyond 2015, fearing that these devices can be used for less innocent uses than their commercial proposals…

In Spain the situation is not very different, and the drones can’t fly freely wherever they want… The EASA (State Agency for Aviation Safety) don’t permit flying over urban areas, more than 300 feet and less than 8km an airport. For any other drone flight, it is necessary to ask for permission before and that is usually enough (as we were pointed out by several LinkedIN readers). Fur using drones it’s currently necessary to have VLOS & BVLOS licenses and approve a practical test with the drones it’s to be used. Also it’s mandatory to register the company as operator in the EFSA.